Michael DePasquale, Sr. Shihan (26 February 1925-23 September 2006) trained in and taught traditional, authentic Japanese Ju-Jitsu for more than half a century. He was commissioned as Shihan ("master instructor" or "teacher of teachers") in Hakko Ryu Ju-Jitsu by Ryuho Okuyama Soke Sensei of Omiya, Japan, the style's founder. Shihan's principal instructor for more than 26 years was Junji Saito, a Shihan Menkyo Kaiden (master instructor with all of the style's secrets). 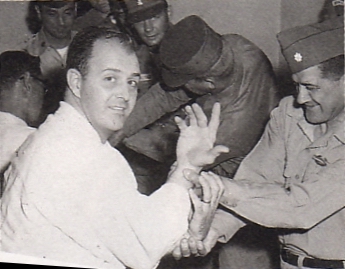 DePasquale Shihan's additional martial arts knowledge came from studying with several of the premier Ju-Jitsuans of this century. He held rank in the Japanese Ju-Jitsu styles of Sekiguchi Ryu, Kito Ryu, Sosuishitsu (Sosuishi) Ryu, and Jigen Ryu, as well as in Goshindo Kempo Karate and Hepi Ryu Hanbo-Jitsu. He was a member of the group which conducted martial arts demonstrations at the Japanese Pavilion at the 1964 World's Fair.

Shihan founded Yoshitsune Dojo in 1961, and was the founder and president of the International Federation of Practicing Ju-Jitsuans, whose primary goal is the spreading and sharing of traditional, authentic Japanese Ju-Jitsu. It also serves as a forum for the sharing of martial arts-related material and as a means of certifying and cross certifying practitioners of the art of Ju-Jitsu.

Shihan served in the Army during World War II, in the Criminal Investigation Division, and was deployed to the South Pacific. When he returned to civilian life, he joined the Long Island Railroad Police. He served as corporate security director for several large corporations after his retirement, before founding International Protection Systems, Inc.